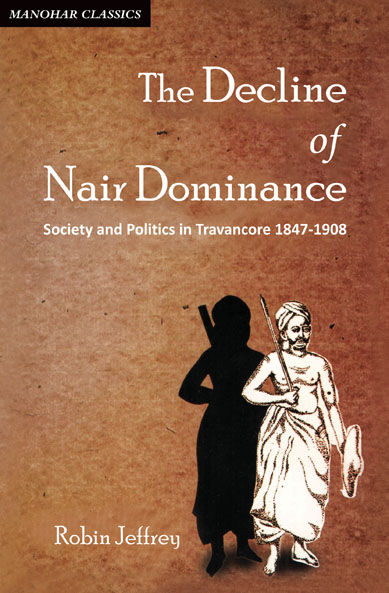 The Decline of Nair Dominance: Society and Politics in Travancore 1847-1908

This book tells the story of how a longstanding matrilineal society, in which women provided the reference point for the control of property, began to crumble in the late nineteenth century, eaten away by the demands of a modernized state and ridiculed by foreign missionaries and Hindu critics from elsewhere.

When the book begins in 1847, high-caste families, mostly Nairs, still held slaves, controlled most of the land in the southern princely state of Travancore and demanded humiliating deference from lower castes. When the book ends at the time of the First World War, land and wealth seem to be passing into the hands of Christians and lower castes, the latter are protesting against social discrimination and Nair critics are calling for reforms of matrilineal practices and even for the abolition of matriliny itself.

Anyone who has walked the streets of Trivandrum, or pondered the remarkable social achievements of ‘the Kerala model of development’, will find in this book a vivid evocation of a time in history and an essential foundation for their understanding of ‘God’s own country’.

Robin Jeffrey first visited Kerala in 1967. The Decline of Nair Dominance grew out of a doctoral thesis submitted to Sussex University in 1973. He is the author of Politics, Women and Well-Being: How Kerala Became ‘a Model’ (3rd edn. 2011), India’s Newspaper Revolution (3rd edn. 2010), and co-author with Assa Doron of Cell Phone Nation (2013) and co-editor of More than Maoism: Politics, Policies and Insurgencies in South Asia.
No Review Found