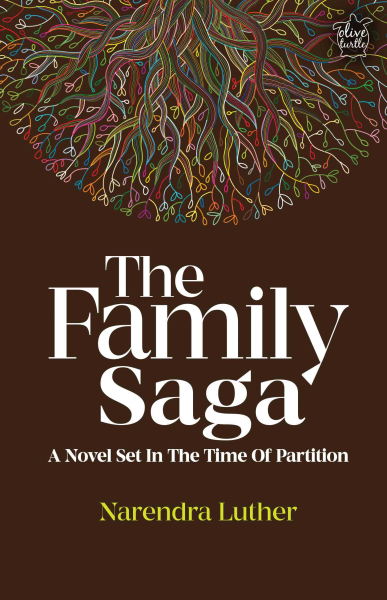 The Family Saga: A Novel Set in The Time of Partition

The Family Saga is the unravelling of a family from the pages of history, one which traces Partition, and flies into the modern times across global borders. It is the story of Ram Lal Khanna, a self-made man, who built up his business in one generation. From where it stood, it had only one direction to go—forward.

Suddenly, in one single evening, their mansion was put to torch, and their teenage daughter was reduced to scattered bones. In a matter of two weeks they were driven across the border and given shelter in the Purana Qila refugee camp in Delhi. They began to build life brick by brick again.

With his trademark optimism, Narendra Luther tells a gripping story of life that has all the drama that encapsulates lives and a lifetime. From Lahore to Delhi, from Amritsar to Berkeley, the Khannas become an embodiment of the Indians who struggled, shaped up and established a space in this world. Thus, the story becomes a celebration of life beyond the boundaries.

Narendra Luther is a former civil servant. He occupied the high table of humour for a long time and won several awards for his books. He organized the World Humour Conference in 1985. He is an eminent authority on the history and culture of Hyderabad and has written a number of books and articles on the subject, some of which have been translated into different Indian languages. He has lectured at various universities and reputed institutions. He is president of Society to Save Rocks and chairman of Yudhvir Foundation. He received the Chishti India Harmony Award in 2016. He lives in Hyderabad.