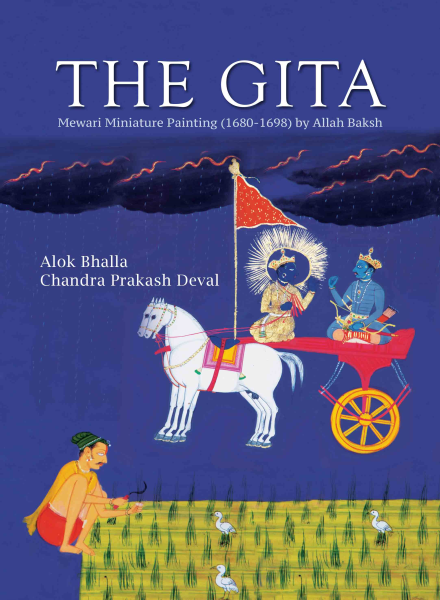 Allah Baksh’s luminous work on the Gita has no precedent in India’s art tradition. He has illustrated Krishna’s ecstatic song, verse by abstract verse. His images, meditative and unostentatious, are free from both heroic posturing and spiritual pride. Their colours are clear and luminous; their lines are restrained and precise. The folio reveals an artist for whom the Gita is a magnificent conversation between man and god about the pity and the sorrow of war. Allah Baksh’s art of visionary thoughtfulness deserves an honoured place in the great library of Indian scriptures and their interpretations.

Alok Bhalla’s commentary on the relationship between the paintings and the verses of the Gita is richly nuanced and imaginative. He challenges us to think about how artists have interpreted India’s sacred texts in radically new ways. Bhalla argues that these miniature paintings are not mere illustrations of Krishna’s divine discourse and that Allah Baksh’s work is a morally significant visual guide to the Gita, as each painting is a unique moment of revelation.

Chandra Prakash Deval’s fine translation of the Gita from Mewari into Hindi is a valuable addition to our understanding of the history of cultural exchange between the different regions and languages of India.

Alok Bhalla has published extensively on literature, translation and politics. He was recently a fellow at Mahatma Gandhi s Sabarmati Ashram and at the institute for Advanced Study at Nantes, France. His recent publications include Story is a Vagabond: Fiction, Essays and Drama by Intizar Husain, and A chronicle of the Peacocks (stories by Intizar Husain).

Chandra Prakash Deval was born in Udaipur. An eminent poet, fiction writer, translator, bibliophile, and cultural historian, he has published fourteen collections of poetry in Hindi and Rajasthani. He has also translated the works of Ashok Vajpeyi, Ramakanth Rath and others into Rajasthani. He has been the recipient of many prestigious literary awards like the Sahitya Akademi Award in 1979 for his poetry collection, Paagi, and the Bihari Puruskar for Hirna! Maun Saadh Van Charana in 2013. The Government of India bestowed the Padma Shri on him in recognition of his contributions to literature in 2011. At present, he is actively involved in the development of Rajasthani language and literature.
No Review Found
More from Author