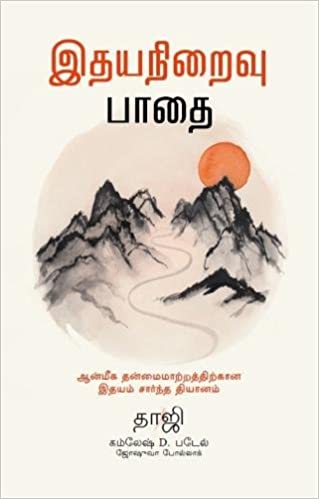 As we manoeuvre the many demands of relationships, career, property and health, we often sense a void, a feeling of alienation from our true selves. Is it possible for one planet to orbit so many suns? We have many centres in our lives, yet where is the true centre, the deepest centre that lies at the core of every heart?

Ensconced in India’s ageless oral tradition, Kamlesh D. Patel—widely known as Daaji, the fourth guru in the Heartfulness lineage—traces a seeker’s journey as he examines the nature of spiritual search. Through a series of illuminating conversations between a teacher and a student, Daaji reveals the core principles of the Heartfulness practice and philosophy to Joshua Pollock, a Heartfulness practitioner and trainer.

From reflecting on the essence of prayer and yogic transmission to demystifying the act of meditation through practical tips, this book will enable us to live beyond the filters of our sensory limitations and discover unity within ourselves. To practise Heartfulness is to seek the essence beyond the form, the reality behind the ritual. It is to centre oneself at the core of one’s heart and find true meaning and contentment there.

KAMLESH D. PATEL is known widely as Daaji. His teachings arise from his personal experience on the path of Heartfulness, while reflecting his deep spirit of enquiry and respect for the world’s great spiritual traditions and scientific advancements. Daaji practised pharmacy in New York City for over three decades before being named as the successor in a century-old lineage of spiritual masters. Fulfilling the many duties of a modern-day guru, he travels widely, extending his support to spiritual seekers everywhere. A self-professed student of spirituality, he devotes much of his time and energy to research in the field of consciousness and spirituality, approaching the subject with scientific methodology—a practical approach that stems from his own experience and mastery in the field.

JOSHUA POLLOCK is a Heartfulness trainer and practitioner from the United States. An accomplished Western classical violinist, he has performed and taught throughout the world, including numerous collaborations with composer A.R. Rahman. A dedicated spiritual aspirant, Pollock is enthusiastic about sharing his passion for meditation, frequently lecturing at private seminars, holding practical demonstrations in corporate, educational and governmental settings, and providing ongoing individual support to local seekers. Pollock holds a bachelor of musical arts degree from Indiana University and two masters degrees from the Guildhall School of Music and Drama in London. He currently resides in India with his wife and their two children.
No Review Found
More from Author