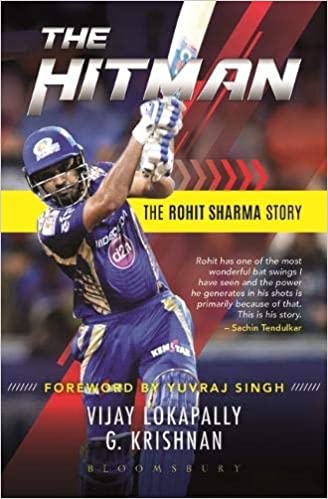 The Hitman: The Rohit Sharma Story

From his cricket debuts in 2007 and 2013 respectively, Rohit Gurunath Sharma has grown to be one of the vital pillars of the Indian cricket team. A modern-day entertainer who refused to compromise his approach to batting, his contribution to India's domination in one-day cricket and victories in the Premier League is indisputable.

This is the story of his journey, of the years of hard work and the confidence that has allowed him to keep his place in the team--and his amazing capacity to come up with big scores.

His combination of aggression and caution, his lazy elegance and his deadly shots have brought a whiff of fresh air to the cricket field.

The Hitman is the riveting account of a batsman, who has always chosen to play on his own terms, from two of India's best-known cricket writers, Vijay Lokapally and G. Krishnan.

Vijay Lokapally is one of the most widely travelled and well-known cricket journalists in the world. He has reported on five World Cups apart from numerous Test matches around the cricket world. This is his third book for Bloomsbury following the best-selling Driven: The Virat Kohli Story (2016 and 2019) and World Cup Warriors: The Boys in Blue (2019). He is also the author of a biography of Virender Sehwag. He writes for The Hindu and Sportstar.

G. Krishnan has been a sports journalist for more than two decades. While he has reported on a wide range of competitive games, his major contributions have been to cricket writing and reporting. Passionate about sports in general and cricket in particular, Krishnan, popularly known as Gikku among friends, has even tried his hand at umpiring, having qualified as one from Tamil Nadu Cricket Association and officiating in the Chennai League between 1997 and 1999 before pursuing sports journalism. Krishnan lives in Mumbai with wife Priya and son Aman, and visits his parents Guruvayoorappan and Geetha in Bengaluru regularly. Hitman: The Rohit Sharma Story is Krishnans first book.
No Review Found
More from Author