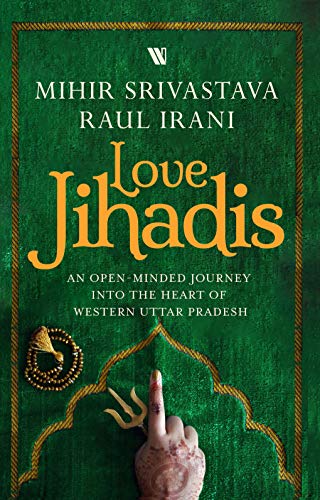 More infamous than famous these days, western Uttar Pradesh provided the necessary respite to two disillusioned journalists from the Capital looking for an escape. Over a year, journalist Mihir Srivastava and photojournalist Raul Irani travelled in and around Meerut, Agra, Deoband, Kairana and Mathura, all cities that have lately been in the news for all the wrong reasons, exploring the region in all its shades of grey. They left behind them the baggage of ideologies and political agendas, lived the kind of truths few people seek, and grew rich with experiences, thoughts, and most important, hope for the country. The result of these expeditions is this photo-filled book that is the two journalists’ invitation to readers to travel the same eventful and significant paths that they did. Partly a travelogue, partly a truth-seeking journey, Love Jihadis is wholly insightful about a region that the whole country has heard much about, but few have explored for themselves.

Mihir Srivastava is a Delhi-based journalist with an interest in painting. Now senior associate editor with the weekly newspaper Patriot, he worked with leading news magazines such as India Today, Outlook and Tehelka over the last fifteen years. An existentialist by nature, he likes to visit people instead of places and backpacks every year in Europe and other parts of the world. For him, travelling is not simply a pleasure. It is serious business.

Raul Irani is the photo editor of Open magazine. Inspired by his father, a journalist, he started work as a photojournalist at the age of fifteen, using a digital camera his parents had bought him after selling the family jewellery. Affable and with a great sense of humour, he loves Sufi music and is an undiscovered cricket prodigy with the unique distinction of hitting six sixes in one over at a university level cricket match.
No Review Found