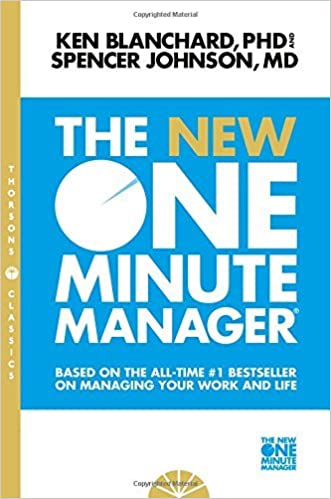 The New One Minute Manager

The book is written for managers who have to supervise and control their employees as well as complete certain essential office tasks. It covers certain techniques that could help its readers in improving their productivity, job satisfaction and personal prosperity. This is because individual satisfaction can gradually lead to the growth of any organisation.

The authors of the book Kenneth Hartley Blanchard and Spencer Johnson have briefly explained few methods of management that are based on few studies in medicine and behavioural sciences. The book talks about three practical management techniques such as one minute goal setting, one minute praising and one minute reprimand. These three simple yet effective techniques could do wonders for both individual and organisational growth.

The one minute goal setting technique says that each member of a team is essential to fulfil the set goals. For instance, in order to complete daily, weekly, monthly or yearly tasks, team effort is needed, and for that, individual effort matters a lot.

One minute praising technique is all about appreciation. According to this technique a manager must reward a team member for completing a specific task efficiently. Plus, a manager could spend a minute to acknowledge a hardworking employee.

The last technique is one-minute reprimand that says that the manager has to give feedback to few members who committed mistakes in their tasks. But the feedback must be given in polite manner so that their interpersonal relations are not affected.

By following these three effective techniques, a manager may grow individually as well as lead to organisational growth in long term. Written in simple, easy-to-understand language, the book can help the readers understand how simple changes can actually work in real management situations.

Spencer Johnson, MD, is the author of Who Moved My Cheese?, the global multi-million-copy bestseller. He is also the author of the Present and Yes or No and the co-author of the One Minute Manager. His works have become cultural touchstones and are available in over forty languages. He died in July 2017.

Ken Blanchards impact as a writer is far reaching. His bestselling book The One Minute Manager, coauthored with Spencer Johnson, has sold more than nine million copies worldwide and is still on bestseller lists. The One Minute Manager has been translated into more than twenty-five languages and as regarded as one of the most successful business books of all time. Dr. Blanchard has received several awards and honors for his contributions in the field of management, leadership, and speaking. He also received the 1992 Golden Gavel Award from Toastmasters International.
No Review Found
More from Author