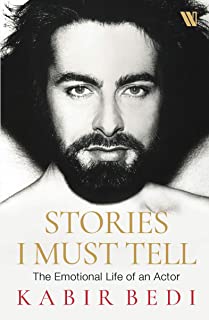 The Stories I Must Tell: The Emotion Life of an Actor

Kabir Bedi, an international star and a man—like all men—with strengths and frailties. As Kabir bares his soul, the stories come tumbling out. That first magical encounter with the Beatles as a student in Delhi. The sudden move to Bombay, away from home, friends and college. His exciting years in advertising, his extraordinarily successful career abroad and his many painful setbacks. His relationships with the irrepressible Protima Bedi and the dazzling Parveen Babi that changed the course of his life. Of the scars they left, and the trauma of three divorces, and how he finally found fulfilment. And why his beliefs have changed. These are tumultuous stories set in Hollywood, Bollywood and Europe. The joys of blazing new trails abroad, and the dangers of them. He also tells the fascinating love story of his Indian father, a philosopher in Europe, and his British-born mother, the world’s highest-ranked Buddhist nun. And most poignant of all, the battle to save his schizophrenic son. Stories I Must Tell is the unusually candid and compelling memoir of a man who holds nothing back, in love or in storytelling. It is the story of a middle-class boy from Delhi whose career now spans the globe. Equally, it is the tale of how he survived the roller-coaster journey of the making, unmaking and remaking of him as a person.

Kabir’s credits include starring with Michael Caine in Ashanti and Roddy McDowall in Thief of Baghdad, and playing the title role in the Italian film The Black Pirate (Il Corsaro Nero). On American television, he has acted in Highlander, Murder She Wrote, Magnum, P.I. , Dynasty and many HBO mini-series. On stage, he starred in John Murrell’s Taj at the Luminato Festival in Canada, and M.M. Kaye’s The Far Pavilions in London’s West End. In India, he has done close to seventy Bollywood films, famously starring with Rekha in Khoon Bhari Maang. Kabir is known for his philanthropic and social causes. He is the Honorary Brand Ambassador of SightSavers India, which gives sight to the visually challenged, and of Care & Share Italia, which educates and looks after street children, from school to university, in Andhra Pradesh and Telangana. Kabir lives with his wife Parveen Dusanj, a producer, in Juhu, Mumbai. He is writing his next book, continues to act and is a commentator on television. He voices ad films and documentaries, and travels regularly to his three favourite cities, Rome, London and Los Angeles. For Kabir, all the world’s a stage.
No Review Found