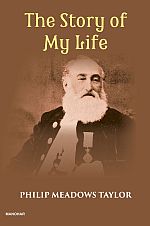 The Story of My Life

Philip Meadows Taylor has often been called the last of the Adventurers. This autobiography is a surprisingly well written record of the wanderer, so frequent in English life since Plassey, who ‘runs away early to the tropics and is at home with the palms and the banyans’. Amazing things are revealed in this biography. Completed in 1874 it depended not only on an old man’s uncertain recollections, but on the mass of corres­pondences with his father during the forty years that he lived in India. He had the liveliest affection for the people of India and treated men and women of all ranks with due respect, something wanting in most British officers.

Philip Meadows Taylor (1808-76) was sent out to India to become a clerk to a Bombay merchant. However, Baxter was in financial difficulties and in 1824 Taylor gladly accepted a commission in the service of the Nizam of Hyderabad. He was speedily transferred from military duty to a civil appointment and in this capacity acquired a proficient knowledge and the people of southern India. Meanwhile, he studied the laws, geology and the antiquities of the country and became an expert in megaliths. Taylor is the author of several popular books, including Confessions of a Thug, Tippoo Sultan, Seeta and A Noble Queen.
No Review Found
More from Author