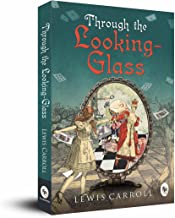 5
0%
0
4
0%
0
3
0%
0
2
0%
0
1
0%
0
For some minutes Alice stood without speaking, looking out in all directions over the countryâ€”and a most curious country it was.â€ curled up in an armchair with her black kitten, Kitty, as Alice shares with it her ideas about a looking-glass house, she suddenly finds herself up on the chimney-piece, on the other side of the mirror. In a room that looks much like her own but where everything is exactly reversed, Alice sees chessmen walking around. And as she steps out of the looking-glass house into the garden of live flowers, she is taken to the Hill by the Red queen. â€œI declare itâ€˜s marked out just like a large chess-board!â€ Alice said at last. â€œThere ought to be some men moving about somewhereâ€”and so there are!... Oh, what Fun it is! How I wish I was one of them! I couldn't mind being a pawn, if only I might joinâ€”though of course I should like to be a queen, best.â€ as Alice embarks on an adventure, joining in as a pawn in the game and exploring this fantastical world of chessmen, Humpty Dumpty, Tweedledum and Tweedledee, will she become a queen?.

Lewis Carroll was the pen name of Charles Lutwidge Dodgson (1832-1898) who was an English mathematician, photographer and Anglican deacon. He is best known for his childrenâ€™s fiction, Aliceâ€™s Adventures in Wonderland and its sequel Through the Looking-Glass.
No Review Found
More from Author