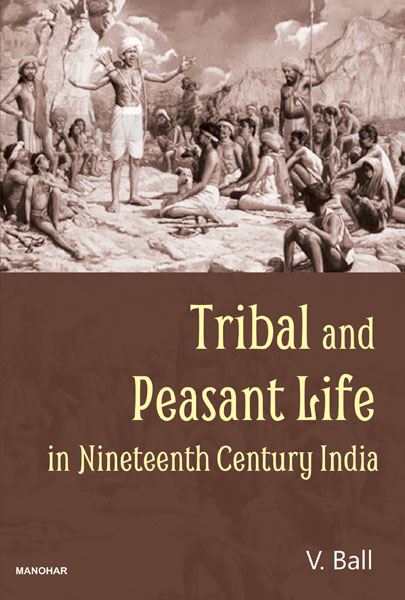 V. Ball, a renowned geologist, toured extensively through the remotest parts of India between the years 1864 and 1878. His journies took him through Bengal, Bihar, Orissa, Central and Western India, Kumaon, Baluchistan and Afghanistan and the Andaman and Nicobar islands in the Bay of Bengal. He spent days and months amongst the villagers and tribals to familiarize himself with their way of life and surroundings. It was out of these field studies that the work emerged in its present form. Published in 1880 the author takes his readers away ‘from the scenes of display and splendour’ of the great cities, rajas and princes. The object of this work in the words of the author himself ‘is to describe parts of India which are out of the ordinary tracks’.

The book is virtually an encyclopaedia of peasant and tribal life in India. The author has given a vivid account of the various races, castes and tribes he came in contact with during his journies, notably the Santhals, Kols, Uraons, Karens, Serakas and Bhumizs, etc. Here are descriptive accounts of their customs and beliefs, religions and festivals, caste structure, crime, social behaviour and attitudes, methods of cultivation, agricultural imple­ments and economic conditions.

In addition to issues related to peasant and tribal life the author has also taken into account the lives of coalminers, labourers, village officials, rural elite and the police as well as life in the jungles of India.

The book also covers many other subjects like Geology, Botany and Fauna, etc. It is a most lively, descriptive and analytical account written by any scholar on the life in nineteenth century India. It will be a valued possession for the students and scholars of anthropology, sociology, history, economics and geology.

V. Ball, a renowned naturalist, was associated with the Geological Survey of India. He was a fellow of the Calcutta University and of Geological Societies of London and Ireland. He was also a member of the Asiatic Society of Bengal, The Zoological and Botanical Society of Vienna and the British Ornithologists Union. He contributed papers to the Journal of the Asiatic Society of Bengal and is the author of The Diamonds, Coal and Gold in India: Their Mode of Occurrence and Distribution, London, 1881; and A Manual of Geology of India, Calcutta, 1881.
No Review Found