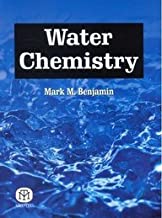 Intended for upper-level undergraduates or first-year graduate students who have a grasp of basic chemical concepts and thermodynamics, this rigorous and full-featured text introduces the principles and applications of chemical equilibrium in aquatic systems. Benjamin's writing style and presentation of topics are accessible. Topics build upon one another in a clear and logical fashion, and linkages between chapters are emphasized and constantly reinforced, ultimately providing a solid, thorough framework for understanding equilibrium in complex aquatic systems. Concepts are not only developed mathematically but also explained in terms of molecular structure and interactions. Numerous analogies from nonchemical systems round out the presentation and facilitate the development of an intuitive understanding of the concepts, while extensive example problems demonstrate their application to natural and engineered aquatic systems. Instructor resource materials, including solutions to end-of-chapter problems, are available on the author's Web site.

Mark M. Benjamin is the Alan and Ingrid Oberg Professor of Civil and Environmental Engineering at the University of Washington, where he has served on the faculty since 1978. He received his undergraduate degree in chemical engineering at Carnegie-Mellon University and his Masters and Ph.D. degrees in environmental engineering from Stanford University. Dr. Benjamin has directed and published research on various aspects of water chemistry and water treatment processes. His long-term interests have been in the behavior of metals and their interactions with mineral surfaces, and in the reactions of natural organic matter in water treatment systems. He and his students have received three patents for treatment processes that they have developed. Their publications have won several awards, and three of his students have won awards for best doctoral dissertation in environmental engineering. Dr. Benjamin is a member of several professional societies and has served on the board of the Association of Environmental Engineering and Science Professors.