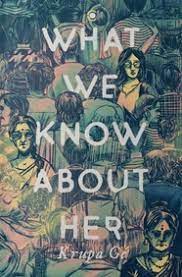 What We Know About Her

Yamuna is adrift. A long-term relationship has come to an end. Her mother and she are at loggerheads about their ancestral home in Chingleput, which she loves and lives in. Even her PhD on early twentieth-century music in Tamil Nadu seems to be going nowhere—until it leads her to an unexpected puzzle from the past. During her research, she comes to be fascinated by her enigmatic grandaunt, Lalitha, who rose to prominence as a Carnatic musician at a time when thirteen-year-old brides were the norm. And then she chances upon a letter written by her own grandmother to her grandfather that opens up another window into Lalitha’s life. She wants to know more. Only, the more questions she asks, the closer her family draws its secrets. No one will talk to her about this long-dead ancestor’s life or death. What lies beneath the stories they are willing to tell? Beyond the letters that Yamuna manages to purloin from her beloved grandfather’s papers when she visits him in Banaras? What did this family do to Lalitha? Krupa Ge’s debut novel is an absorbing tale of an angsty young woman who must unravel the secrets of her family before she can untangle her own life.

Krupa Ge is a writer based in Chennai. Rivers Remember, her book on the 2015 floods that ravaged Chennai, was published by Context in July 2019. Her reportage and cultural writings have appeared in The Hindu, Firstpost and The New Indian Express, among other Indian and international publications over the last thirteen years. In 2017, she won a Laadli Award for a weekly column on women in cinema, ‘Ms. Representation’. She was awarded the Toto-Sangam Residency Fellowship for the year 2016, and was shortlisted for a Toto Prize in Creative Writing the same year. She is also currently dabbling in screenwriting.
No Review Found