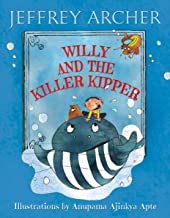 Willy and the Killer Kipper

5
0%
0
4
0%
0
3
0%
0
2
0%
0
1
0%
0
When the worldâ€™s largest submarine, The Neptune is lost somewhere at the bottom of the Atlantic Ocean, Willy and Randolph the Bear must save all the trapped sailors â€“ with some help from the Rightwayup Bird, Sybil the Seagull, and Boris the Blue Whale. Which means defeating Konrad the Killer Kipper and his gang of a hundred horrible herrings who have captured The Neptune because he wants to eat the sailors. Can Willy and his friends win against them?