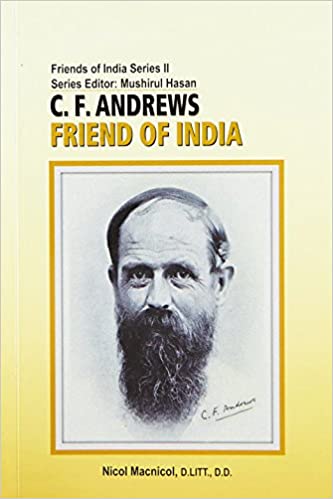 5
0%
0
4
0%
0
3
0%
0
2
0%
0
1
0%
0
Written in 1944, this little book is a survey and estimate of CF Andrewsâ€™ life and work in the nearly forty years he lived in India. It describes his human traits, his many abiding friendships and his relationship with India and Indians. Late Prof. Mushirul Hasanâ€™s introduction provides the context within which contemporary readers can understand the relevance of Andrewsâ€™ relationship with India.

Nicol Macnicol (1870-1952) was educated at the University of Glasgow. He then studied at the United Free Church Theological College before beingâ€…ordainedâ€…asâ€…aâ€…missionaryâ€…toâ€…Indiaâ€…inâ€…1895.

After a distinguished career in the University of Glasgow and the Free Church of Scotland Theological College, Nicol Macnicol was appointed to the Western India mission of the Free Church of Scotland (later United Free) and for five years worked in Bombay, being in charge of the Wilson High School and also doing general evangelistic work.
No Review Found
More from Author