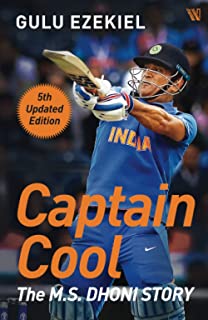 Mahendra Singh Dhoni is as calm and unruffled a sportsman on the field as he is self-effacing off it. But ‘brute strength’, ‘murderous form’ and ‘a man possessed’ were some of the phrases that came to mind when, on 5 April 2005 in Visakhapatnam, he exploded onto international consciousness by becoming the first regular Indian keeper to score a one-day century. On that day, ‘Mahi’ Dhoni transformed from a boy hailing from an obscure small town to a sports legend with the aura of a rock star. How that legend came to be—and grew from game to game—is told here by noted sportswriter Gulu Ezekiel in his crackling but measured prose. Captain Cool is the story of M.S. Dhoni, Indian cricket’s poster boy. It is also the heartwarming account of the boy from Ranchi who grew into a worldwide icon and won for India the World T20 in 2007, the world number one Test ranking in 2009, the World Cup in 2011 and the Champions Trophy in 2013. Now in the autumn of his career, Mahi continues to be an inspiration to his teammates and millions of his fans

GULU EZEKIEL (born 1959) is one of the country’s most prolific and well-known sports journalists. Having begun his career in Madras in 1982, Gulu went freelance in 2001 after moving to New Delhi ten years earlier. In those ten years he served in a senior capacity in numerous media organisations, reporting on major sporting events both in India and abroad. Gulu has extensive experience in print, radio, TV and internet and has written thousands of articles for nearly 100 publications from around the world. Today he is a familiar face on numerous TV channels as a guest expert. His first book was released in 1992. This is his 14th and contains a selection of 40 of his best articles over the three decades of his career.
More from Author