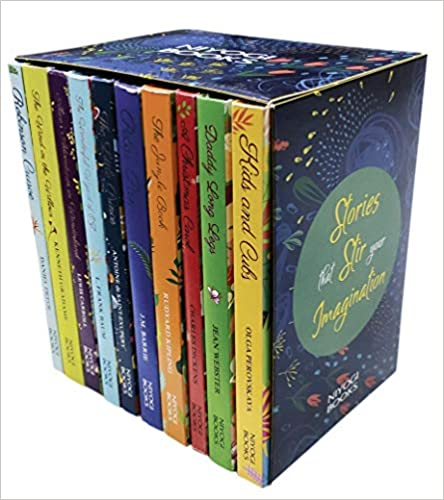 Introduce your children to this curated list of evergreen classics from all across the globe. These classics are a must-read for children between 7-13 years as it not only stirs their imagination and stimulates their creativity, but the meticulous timelines about the author and the year the book was written, gives a literal, historical and cultural context to these wonderful stories. The books in the box are: The Jungle Book, The Little Prince, The Wind in the Willows, A Christmas Carol, Alice’s Adventures in Wonderland, Daddy Long Legs, Kids and Cubs, Peter Pan, Robinson Crusoe and The Wonderful Wizard of Oz. Printed in a handy size with covers specially designed for children (in bright colors), these books are marvelous reads for both the young and young at heart.

Jean Webster was the pen name of Alice Jane Chandler Webster (1876–1916). She was an author best-known for her books Daddy- Long-Legs and Dear Enemy. Several of her books have female characters who grow up to deal with the social issues of the time and are written in a sprightly and entertaining tone. A successful author in her lifetime, she was also involved with social issues such as reforms for orphanages, promoting adoption, women’s education and the right to vote for women.

Charles Dickens (1812–1870) is considered a literary genius and one of the greatest writers of the Victorian era. He is known for creating many memorable characters in his books, which were very popular in his lifetime. Some of his best-known works are The Pickwick Papers, David Copperfield, Oliver Twist, Great Expectations and A Tale of Two Cities. He also a strong campaigner for education, social reforms and the rights of children. His grave can be seen at the Poets’ Corner in Westminster Abbey.

Born on December 30,1865 in Bombay, India, Joseph Rudyard Kipling was of the most-acclaimed writers, of both prose and verse, of the late 19th and early 20th centuries. He spent his early childhood in India. Apart from his poems for children, Kipling is remembered for his tales and poems about British Soldiers in India. His most famous works include The Jungle Book, Kim, Just So Stories, the Man Who Would Be King, If and The White Mans Burden. Kiplings significant contribution to the field of literature won him the Nobel Prize in 1907, making him the first English language writer, and the youngest till this date, to receive the prize. He died on January 18, 1936.

Antoine Marie Jean-Baptiste Roger, comte de Saint- Exupéry (1900–1944), was a French aristocrat who was known as a pioneering aviator and writer. He is best known for his novella The Little Prince (Le Petit Prince) and for his memoir Wind, Sand and Stars. He received several of France’s highest literary awards and the United States National Book Award. His plane went missing over the Mediterranean Sea in July 1944. He is believed to have passed away at that time.

Sir James Matthew Barrie (1860–1937) was a Scottish novelist and playwright, who is known for works such as The Admirable Crichton and The Little White Bird. He moved to London, where he met the Llewelyn Davies boys, who inspired him to write Peter Pan. Barrie unofficially adopted the Davies boys after their parents passed away. Before his death, Barrie gave the rights to the book and play versions of Peter Pan to the Great Ormond Street Hospital for Children in London.

Kenneth Grahame (1859–1932) was a Scottish writer, best-known for The Wind in the Willows (1908), which is considered one of the classics of children s literature. He worked at the Bank of England from 1879 to 1908 and told bedtime stories to his son Alastair, which later became his most famous book. His epitaph reads, To the beautiful memory of Kenneth Grahame, husband of Elspeth and father of Alastair, who passed the river on the 6th of July, 1932, leaving childhood and literature through him the more blest for all time.

Lyman Frank Baum (1856 –1919) was an American writer, best-known for his work The Wonderful Wizard of Oz and its 13 sequels which describe fantastical characters and situations in the magical land of Oz. He had a passion for the theatre and was keen to see his work converted to the stage or as film adaptations. This came true with the 1939 film version of his book. He wrote many other novels, short stories and scripts, some of which depict gadgets such as television, mobile phones and computers, much before they were invented.

Olga Perovskaya (1902–1961) was a children’s writer in the erstwhile Soviet Union. She is best known for her book Kids and Cubs (Rebyata i Zveryata) based on her childhood in Kazakhstan. Kids and Cubs is popular around the world and has been translated into several languages. During the Great Purge, she was arrested and sent to prison for 10 years but was later released and sent into exile.

Daniel Defoe (1660–1731) was an English writer and journalist who wrote on many topics and is most renowned for his novel Robinson Crusoe. He was often in debt and in trouble with the law, but is remembered as a forthright thinker, for his writings on politics, economics and social issues, as well as a populariser of the novel.

Lewis Carroll was the pen name of Charles Lutwidge Dodgson (1832-1898) who was an English mathematician, photographer and Anglican deacon. He is best known for his children’s fiction, Alice’s Adventures in Wonderland and its sequel Through the Looking-Glass.
No Review Found
More from Author