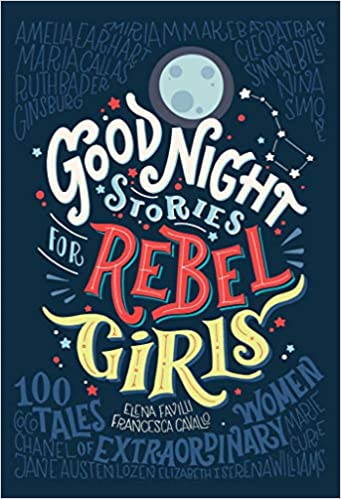 AUSTRALIAN BOOK INDUSTRY AWARD FOR INTERNATIONAL BOOK OF THE YEAR

The New York Times bestselling Good Night Stories for Rebel Girls is a children's book packed with 100 bedtime stories about the lives of extraordinary women from the past and the present, illustrated by 60 female artists from all over the world.

This must-have volume brings readers on an empowering journey, introducing them to the real-life adventures of trailblazing women from Elizabeth I to Malala Yousafzai. The unique narrative style of Good Night Stories for Rebel Girls transforms each biography into a fairytale, filling readers with wonder and a burning curiosity to know more about each hero. Each woman's story is also accompanied by a full-page, full-color portrait that captures her rebel spirit.

This hardcover edition, with an extra-smooth matte scuff-free lamination, 100lbs paper, a satin ribbon bookmark, and extraordinary print quality, is the perfect gift for any young reader, and begs to be read again and again.

Francesca Cavallo and Elena Favilli grew up in Italy. They are New York Times best-selling authors whose work has been translated into more than thirty languages and they have written for and been reviewed in various publications, including The Guardian, Vogue, The New York Times, El Pais, The Los Angeles Times, Colours Magazine, Corriere Della Sera and La Repubblica. They are the founders of Timbuktu and they live in Venice, California.
No Review Found
More from Author