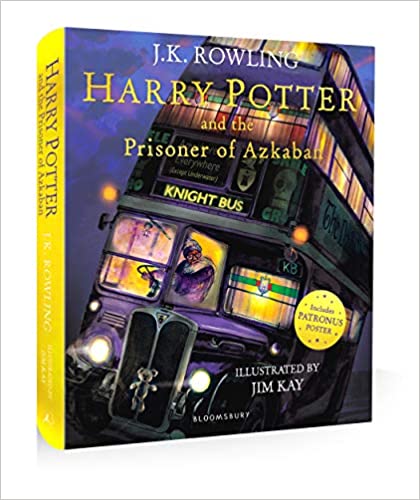 Harry Potter and the Prisoner of Azkaban

Jim Kay's dazzling depiction of J.K. Rowling's wizarding world has won legions of fans since the first Illustrated Edition of the Harry Potter novels was published in hardback in 2015, becoming a bestseller around the world. This irresistible smaller-format paperback edition of Harry Potter and the Prisoner of Azkaban perfectly pairs J.K. Rowling's storytelling genius with Jim Kay's illustration wizardry, bringing the magic of Harry Potter to new readers with full-colour pictures and a handsome poster pull-out at the back of the book. This edition has been beautifully redesigned with selected illustration highlights, and is packed with breathtaking scenes and unforgettable characters - including Sirius Black, Remus Lupin and Professor Trelawney. The fully illustrated edition is still available in hardback. Fizzing with magic and brimming with humour, this inspired reimagining will captivate wizards and Muggles alike, as Harry, now in his third year at Hogwarts School of Witchcraft and Wizardry, faces Dementors, death omens and - of course - danger.

Jim Kay won the Kate Greenaway Medal in 2012 for his illustrations in A Monster Calls by Patrick Ness. He studied illustration at the University of Westminster, and worked in the Library & Archives of Tate Britain and then as an assistant curator of botanical illustrations at the Royal Botanic Gardens at Kew before returning to producing art full-time. After a one-man exhibition at Richmond Gallery he was approached by a publisher and his freelance career began. Alongside his illustration work, Jim has produced concept work for film and television, and contributed to the group exhibition Memory Palace at the V&A Museum in London. The Illustrated Edition of Harry Potter and the Philosophers Stone was published to international acclaim. Bloomsbury has commissioned Jim to illustrate all seven books in J.K. Rowlings classic series. Jim lives and works in Sussex with his wife.
No Review Found
More from Author