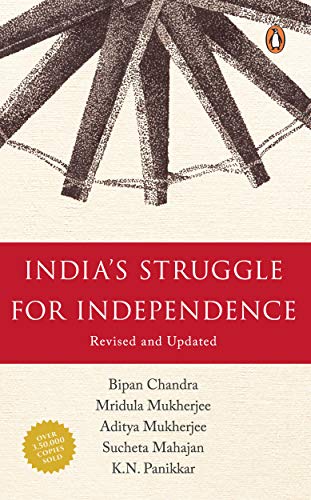 India's Struggle for Independence is the first and the most reliable study of the country's epic fight for freedom. This classic word begins with the abortive revolt against the British in 1857 and culminates in India's Independence in 1947. Based on years of research as well as personal interviews with hundreds of freedom fighters, it presents a lucid and enduring view of the history of the period.

Bipan Chandra is a popular Indian historian/writer who specializes in the political and economic history of modern India. He has been involved with the Marxist school. Bipan Chandra is currently Chairman, National Book Trust, and Professor Emeritus, Jawaharlal Nehru University, New Delhi. He has been the President of the Indian History Congress, which endowed him with the life-time achievement award in 2008. He was appointed National Research Professor in 2006. Bipan Chandra was born in 1928 in Kangra, Himachal Pradesh. Chandra is the author of several books on nationalism, colonialism, and communalism in modern India.

Mridula Mukherjee was educated at Lady Shri Ram College, New Delhi, and JNU. She was Professor of Modern Indian History at the Centre for Historical Studies, JNU, and Director, Nehru Memorial Museum and Library. Her areas of special interest are agrarian history. Peasant movements and the national movement, particularly the Gandhian phase.

Aditya Mukherjee was educated at St Stephens College, Delhi, and at JNU. He was Professor of Contemporary Indian History at the Center for Historical studies, JNU, and was Director, Jawaharlal Nehru Institute and capitalist development, and contemporary economy and politics.

K.N. Panikkar was educated at the Madras and Rajasthan universities. He was Professor of Modern Indian History at the Centre for Historical studies, JNU, and Vice Chancellor, Shri Shankaracharya University, Kalady, Kerala. He was also Chairman, Kerala Council for Historical Research, and Vice Chairman, Higher Education Council, Government of Kerala. He has published widely in the areas of cultural and intellectual history and agrarian history.

Sucheta Mahajan was educated at Indraprastha College, Delhi, and JNU, and Chariperson, P.C. Johsi Archives on Contemporary History, JNU. Her research focus has been on the political process in India in the 1940s, including Independence and partition, popular struggles and the issues that occupied the last phase of life of Mahatma Gandhi
No Review Found
More from Author