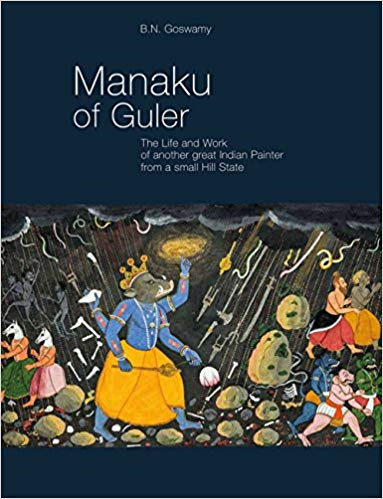 Manaku of Guler: The Life and Work of another great Indian Painter from a small Hill State

The work centres on Manaku, the older brother of the greatly celebrated painter Nainsukh, reconstructing whatever little is known of his life, but closely following his artistic journey. Manaku came from an obscure little town in the hills of northern India, and yet his vision knew almost no limits. Endowed with soaring imagination and great artistic skills, he was capable of painting giant rings of time upon timeless waters, envisaging the world of gods and demons, littered with cosmic battles and earthly triumphs, and gazing, with tender eyes, upon the world of two lovers.

B.N. Goswamy, a distinguished art historian is Professor Emeritus of Art History at Panjab University, Chandigarh. His work covers a wide range of subjects, and is regarded, especially in the area of Indian painting, as having influenced most thinking. He has been the recipient of many honours, including the Jawaharlal Nehru Fellowship, the Rietberg Award for Outstanding Research in Art History, the JDR III Fellowship, the Mellon Senior Fellowship and, from the President of India, Padma Shri (1998) and Padma Bhushan (2008). Apart from Panjab University, Professor Goswamy has taught, as Visiting Professor, in major universities across the world, and has been responsible for significant exhibitions of Indian art at international venues. He is the author of over twenty-five books on Indian art and culture, including Pahari Painting: The Family as the Basis of Style (1968); Painters at the Sikh Court: A Study Based on Twenty Documents (1975); A Place Apart: Paintings from Kutch (1983); The Essence of Indian Art (1986); Wonders of a Golden Age: Painting at the Courts of the Great Mughals (1987); Pahari Masters: Court Painters of Northern India (with E. Fischer, 1992); Indian Costumes in the Calico Museum of Textiles (1993); Nainsukh of Guler: A great Indian Painter from a small Hill State (1997); Domains of Wonder: Selected Masterworks of Indian Painting (with C. Smith, 2005); and, more recently, The Spirit of Indian Painting: Close Encounters with 100 Great Works (2014, 2016) and Pahari Paintings: The Horst Metzger Collection in the Museum Rietberg (with E. Fischer, 2018).
No Review Found
More from Author