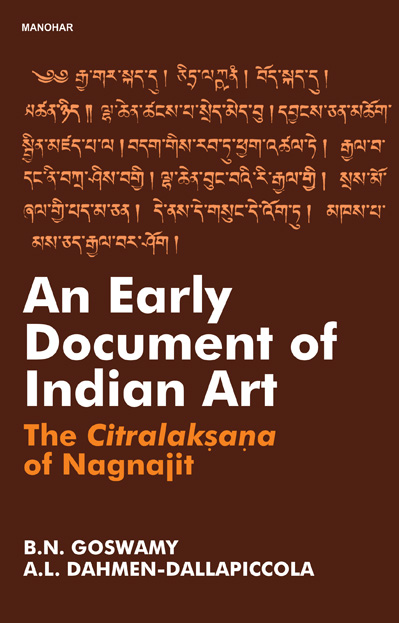 An Early Document of Indian Art: The Citralaksana of Nagnajit

Among the earliest works on the canons of Indian art, the Citralak]sa]na of Nagnajit is presented here for the first time in an English translation.

Written in Sanskrit probably in the Gupta period, lost to Sanskritists for nearly a thousand years, known to Tibetans from the medieval times, and translated into German in the early years of the last century, here is a work of great antiquity and significance. The work is to be carefully distinguished from the Citralak]sa]na chapter in the sixteenth century text of Sri Kumara’s Silparatna from which it is separated by close to a millennium. It is a text of considerable importance not only for the understanding of the early art of India but also for that of other countries in Asia including Tibet, Mongolia and even China. In addition to dealing with Chitravidya and its origins, it affords a fascinating glimpse into the minds of the theoreticians and artists of the past, with its elaborate details of iconometry, and its emphasis on the all-subduing figure of the Cakravartin, the wheel-turning Master.

B.N. Goswamy, a distinguished art historian is Professor Emeritus of Art History at Panjab University, Chandigarh. His work covers a wide range of subjects, and is regarded, especially in the area of Indian painting, as having influenced most thinking. He has been the recipient of many honours, including the Jawaharlal Nehru Fellowship, the Rietberg Award for Outstanding Research in Art History, the JDR III Fellowship, the Mellon Senior Fellowship and, from the President of India, Padma Shri (1998) and Padma Bhushan (2008). Apart from Panjab University, Professor Goswamy has taught, as Visiting Professor, in major universities across the world, and has been responsible for significant exhibitions of Indian art at international venues. He is the author of over twenty-five books on Indian art and culture, including Pahari Painting: The Family as the Basis of Style (1968); Painters at the Sikh Court: A Study Based on Twenty Documents (1975); A Place Apart: Paintings from Kutch (1983); The Essence of Indian Art (1986); Wonders of a Golden Age: Painting at the Courts of the Great Mughals (1987); Pahari Masters: Court Painters of Northern India (with E. Fischer, 1992); Indian Costumes in the Calico Museum of Textiles (1993); Nainsukh of Guler: A great Indian Painter from a small Hill State (1997); Domains of Wonder: Selected Masterworks of Indian Painting (with C. Smith, 2005); and, more recently, The Spirit of Indian Painting: Close Encounters with 100 Great Works (2014, 2016) and Pahari Paintings: The Horst Metzger Collection in the Museum Rietberg (with E. Fischer, 2018).

Anna L. Dallapiccola is a former Professor of Indian Art History at the University of Heidelberg. Among her many publications are Sculpture at Vijayanagara: Iconography and Style with Anila Verghese; King, Court and Capital: An Anthology of Kannada Literary Sources from the Vijayanagara Capital with C.T.M. Kotraiah and The Great Platform at Vijayanagara: Architecture & Sculpture. All three volumes appeared in the Vijayanagara Research Project Monograph Series issued by Manohar.
More from Author