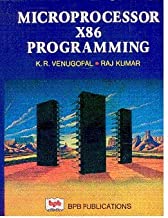 K.R. Venugopal is serving as the Principal and Dean of Engineering at University Visvesvaraya College of Engineering, Bangalore University, Bangalore. He obtained his Bachelor of Engineering from University Visvesvaraya College of Engineering. He received his Masters degree in Computer Science and Automation from Indian Institute of Science, Bangalore. He was awarded Ph.D. in Economics from Bangalore University and Ph.D. in Computer Science from Indian Institute of Technology, Madras. He has a distinguished academic career and has degrees in Electronics, Economics, Law, Business Finance, Public Relations, Communications, Industrial Relations, Computer Science and Journalism. He has authored 23 books on Computer Science and Economics, which include Petrodollar and the World Economy; C Aptitude; Mastering C; Microprocessor Programming; Mastering C++ and others. During his nearly three decades of service at UVCE he has over 175 research papers to his credit. His research interests include Computer Networks, Parallel and Distributed Systems, Digital Signal Processing and Data Mining.