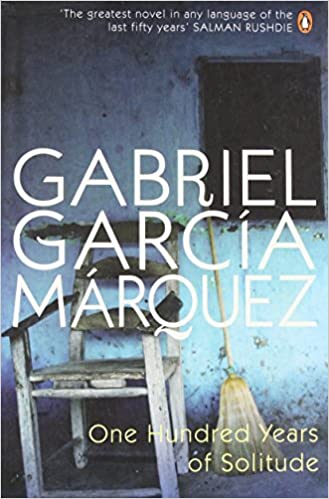 One Hundred Years of Solitude

The novel One Hundred Years of Solitude is an absolute master piece. It manages to capture the various phases and glories of the human history. The book has had a major impact on young minds that have taken up literature as a subject. The book is engaging and intense that reminiscenses of how history repeats itself with the collapse and creation of a new Macondo within a span of a century.

The fall and rise of the Buendia family is captured in the backdrop of all the strife that Latin American societies have witnessed. In this novel one will come across this family name spreading out over seven generations.

The book was originally written in Spannish but has been translated into thirty seven languages and till date has sold over thirty million copies.

The theme of this book is about two families that witness various stages of life over the period of a century. How the protagonist try to come to grips with their past and how this obsessiveness brings about the doom of the family is captured in the novel.

In this book Macondo portrays the new world of United Sates, which appeared more like the Promised Land to so many at one time. But over the course of history it came to be accepted as another illusion.

The book cab be defined as the fine work of a master writer, about work realism. In his imaginary place metaphors and beliefs have become ordinary facts and life has become most uncertain.

Gabriel Garcia Marquez was born in Aracataca, Colombia, in 1927. He studied at the University of Botoga and later worked as a reporter for the Colombian newspaper El Espectador and as a foreign correspondent in Rome, Paris, Barcelona, Caracas and New York. He is the author of several novels and collections of stories, including Eyes of a Blue Dog (1947), Leaf Storm (1955), No One Writesto the Colonel (1958), In Evil Hour (1962), Big Mamas Funeral (1962), One Hundred Years of Solitude (1967), Innocent Erendira and Other Stories (1972), The Autumn of the Patriarch (1975), Chronicle of a Death Foretold (1981), Love in the Time of Cholera (1985), The General in His Labyrinth (1989), Strange Pilgrims (1992), Of Love and Other Demons (1994) and Memories of My Melancholy Whores (2005). Many of his books arepublished by Penguin. He was awarded the Nobel Prize for Literature in 1982. Gabriel Garcia Marquez died in 2014.
No Review Found
More from Author