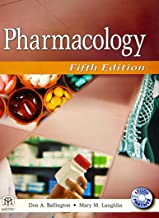 Pharmacology for Technicians, Fifth Edition is designed to develop a basic understanding of drug classes and the mechanisms of action for many drugs. Students gain insight into why certain drugs are prescribed for particular disease states. With this essential background information, students are prepared to make informed, intelligent decisions when dispensing drugs and to play an active role in avoiding errors.

Don A. Ballington, MS, served as program coordinator of the pharmacy technician training program at Midlands Technical College in Columbia, South Carolina for 27 years. He has also served as president of the Pharmacy Technician Educators Council and in 2005 received the councilâ€™s Educator of the Year award. He has been a consulting editor for the Journal of Pharmacy Technology, and over the course of his career at Midlands Technical College, he has developed high-quality training materials for pharmacy techniciansâ€”made available in Pharmacy for Technicians, Pharmacy Calculations for Technicians, and Pharmacy Practice for Technicians published by Paradigm Publishing.

Mary M. Laughlin holds a PharmD and an MEd. Laughlin has been an item writer for both North American Pharmacist Licensure Examination (NAPLEX) and the Pharmacy Technician Certification Exam (PTCE). She is a PRN pharmacist for Walgreenâ€™s in Memphis, Tennessee. Previously, Laughlin has served as assistant director of the pharmacy at the Regional Medical Center in Memphis and assistant professor of pharmacology and pharmacoeconomics at the College of Pharmacy at University of Tennessee Health Science Center in Memphis. She has been involved in initiating two pharmacy technician programs in the city of Memphis. In 2002, Laughlin and her team of pharmacy technicians received the Innovations in Pharmaceutical Care award, presented by the Pharmacy Technician Certification Board (PTCB). Laughlin serves on the Pharmacy Technician Task Force for Tennessee, and on the advisory board for the pharmacy technician training program at the Tennessee Technology Center at Memphis.
No Review Found
More from Author