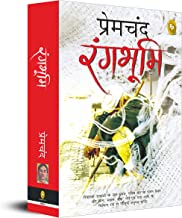 5
0%
0
4
0%
0
3
0%
0
2
0%
0
1
0%
0
A deft portrayal of the country and the society during the colonial rule, Munshi Premchand’s rangbhoomi is a realistic tale exploring the various colours of life. While at one end, we delve into the materialistic and illusionary world riddled with the misuse of authority and the greed for money and fame, on the other end we are touched by the scenes of compassion, forgiveness, and love. A novel highlighting social issues, which were not just prevalent in those times but are as much present in today’s society, rangbhoomi remains a contemporary read.