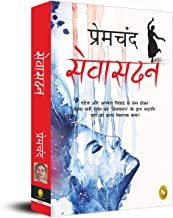 5
0%
0
4
0%
0
3
0%
0
2
0%
0
1
0%
0
Highlighting the social issues prevalent in the country at the turn of the twentieth century, Munshi prenchand’s sevasadan (1918) narrates the poignant tale of Suman, who is trapped in an unhappy, mismatched marriage owing to the evils of the Dowry system. It traces her journey from being the virtuous housewife to being ‘Sumangali’, a courtesan in the kothas of Varanasi. How will Sumac find her redemption?