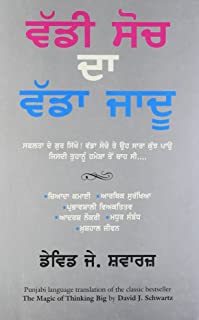 The Magic of Thinking Big (Punjabi)

This Self-Help classic by Dr. Schwartz, will help you to sell better, manage better, earn more money and, most important of all, find greater happiness and peace of mind. The Magic of Thinking Big gives you workable methods and Dr. Schwartz presents a planned programme for living on a grand scale – in your job, family and social life. He proves that you need not have a formidable intellect or a great talent to be a giant among men; but you do need the habit of thinking and acting big.

Born on March 23, 1927, in the United States of America, David J. Schwartz was a motivational writer and life coach, best known for his book The Magic of Thinking Big, which was published in 1959. After earning a Bachelor of Science degree from the University of Nebraska, Schwartz went on to complete his PhD from Ohio State University in 1953. During his tenure as a professor at Georgia State University, Schwartz was always considered a huge source of motivation. And, he proves that in his debut book and in his sophomore book The Magic of Getting What You Want (1983).
No Review Found
More from Author