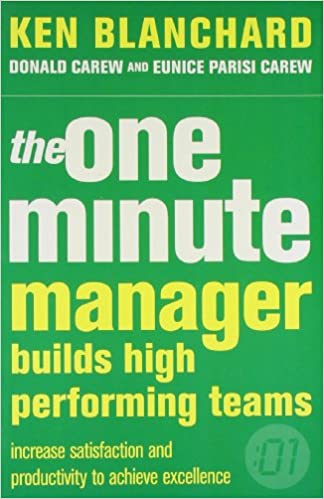 The One Minute Manager Builds High Performing Teams is a management guide. The book explores the concepts of teamwork and management and illustrates how a team goes from a incoherent bunch of different individuals to a cohesive unit with a common goal and works as an efficient unit of substantial potential. The book examines the factors that are important when it comes to the working of greatly successful organisations and tries to break it down into many different motivating and unifying factors. The book breaks down the dynamics of teamwork into stages to illustrate the stepwise progress it makes in its transformation from a entity with distinct and sometimes conflicting members to a cohesive unit which finds consensus in aim, approach and vision.

This book describes the transformation process is four stages - orientation, dissatisfaction, integration and production. It analyses each stage and illustrates the personality of the team members and extrapolates this to the mood of the team itself. The book is a useful read in analysing and illustrating how a manager can help his team progress through the phases of transformation and guide them to an elevated stage of constructive and coherent performance. This edition of the One Minute Manager Builds High Performing Teams has been published in paperback by Harpercollins in 2006.

Ken Blanchards impact as a writer is far reaching. His bestselling book The One Minute Manager, coauthored with Spencer Johnson, has sold more than nine million copies worldwide and is still on bestseller lists. The One Minute Manager has been translated into more than twenty-five languages and as regarded as one of the most successful business books of all time. Dr. Blanchard has received several awards and honors for his contributions in the field of management, leadership, and speaking. He also received the 1992 Golden Gavel Award from Toastmasters International.
More from Author