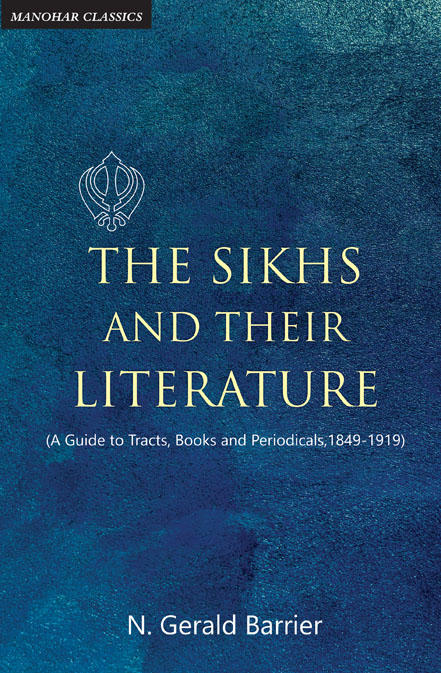 The Sikhs and Their Literature (A Guide to Tracts, Books and Periodicals, 1849-1919)

The students of Sikh history have paid little attention to two significant points in the life of the community—the eighteenth century when Sikh ideas on religion, society and politics crystallized and moulded the subsequent development, of Sikhism and the period following the annexation of the Punjab in 1849 by the British when Sikh ideas moved from defeat towards a new self-awareness and militancy culminating in the formation of the Akali Dal and the Shiromani Gurdwara Prabandhak Committee.

This guide discusses Sikh experience under British raj and introduces the vernacular and English-language literature on and by Sikhs written between 1849 and 1919. It has been designed to facilitate research on this neglected phase of Sikh History and to help scholars locate items relating to their special interests.

An introductory statement on the individuals, organisations and themes involved in the Sikh resurgence is followed by three sections surveying non-serial publications. A concluding section treats Sikh periodicals. Appended are notes on collection of Sikh printed documents and proscribed works and a select bibliography of biographies, autobiographies, and histories relating to the period. There are two indexes (subject-title and general) at the end.

N. Gerald Barrier was Professor of History at the University of Missouri, Columbia, U.S.A. He wrote and edited several publications including. The Sikhs and their Literature, 1849-1919 (1970). The Census in British India: new Perspectives (1981) and India and America: American Publishing on India 1930-1985. He passed away in 2010.
No Review Found
More from Author