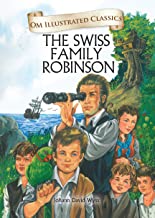 5
0%
0
4
0%
0
3
0%
0
2
0%
0
1
0%
0
Jane Eyre is the tragic story of an orphan young women jane with a strong sense of self. It follows the difficult life journey of jane.who despite experiencing a harsh and loveless upbringing blossomed into an educated virtuous, independent, strong lady facing many challenges with grace and dignity. The beautifully illustrated classic stresses the importance of believing in one own self and having faith, hope and courage in life.

Johann David Wyss was a Swiss writer best known for his children s classic The Swiss Family Robinson. A pastor in Bern, Switzerland, Wyss s writing was influenced by his four sons, and was intended to serve as a moral guide for self-reliance, farming, cooperation, and frugality. Wyss died in 1818 at the age of 74, six years after the publication of The Swiss Family Robinson.
No Review Found
More from Author