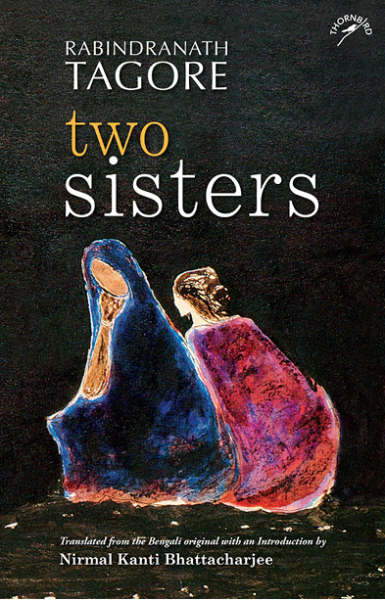 The eternal conflict in the age-old ‘man-woman’ relationship, which typically arises when any one of the two partners seeks both solace and passion in a single partner and is often unable to savour the joys of both together, is the central theme of Two Sisters (Dui Bon by Rabindranath Tagore, 1933). The central character Shashanka, is torn between two women, undecided between his homemaker wife Sharmila and her younger sister, the vivacious and playful Urmimala, who abhors domesticaiton. The two women revolve round their common love interest and are overwhelmed by the intensity of desire, guilt and agony, in an endless cycle of happy conjugality giving way to the blinding intoxication of passion, finally leaving a toxic taste in the mouths of all the protagonists.

The longing for a doting ‘mother’ to take care of all his needs often remains strong in a man smitten by a woman and desirous of her favours. Contemporary society is not devoid of this trait and this novella is thus universal and timeless in its approach.

Nirmal Kanti Bhattacharjee taught English Literature at Gauhati University for ten years and Comparative Literature at Jadavpur University for five years. He then joined Sahitya Akademi’s Eastern Regional Office at Kolkata as its Secretary. After putting in a decade there, he shifted to Delhi and worked as the Director of the National Book Trust, India for a five-year tenure. Later, he also worked as the Editor of Sahitya Akademi’s prestigious journal Indian Literature for five years and Director of K. K. Birla Foundation, New Delhi for six years. Currently he functions as the Editorial Director of Niyogi Books. An accomplished translator from Bengali into English and vice versa, his English translations of fictions of Mahasveta Devi, Sunil Gangaopadhyay and Sirshendu Mukhopadhyay have been well received. He has also translated a short story collection of U. R. Anantamurthy and a novel by Viswas Patil into Bengali. Recipient of the best translator’s award from IBBY Congress, Mr Bhattacharjee has also edited a collection of stories of displacement from Assam.
No Review Found
More from Author