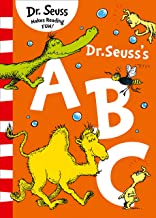 From Aunt Annie’s alligator to the colourful Zizzer-Zazzer-Zuzz, Dr. Seuss’s delightful book introduces early learners to the letters of the alphabet through an amazing array of crazy creatures. Big B, little B, what begins with B? Baby, barber, bubbles and a bumblebee! Children can have lots of fun that is funny learning about big and little letters. With his unique combination of hilarious stories, zany pictures and riotous rhymes, Dr. Seuss has been delighting young children and helping them learn to read for over fifty years. As the first step in a major rebrand programme, HarperCollins has relaunched 17 of Dr. Seuss's best-selling books, including such perennial favourites as The Cat in the Hat, Green Eggs and Ham and Fox in Socks. In response to consumer demand, the bright new cover designs incorporate much needed guidance on reading levels, with the standard paperbacks divided into three reading strands – Blue Back Books for parents to share with young children, Green Back Books for budding readers to tackle on their own and Yellow Back Books for older, more fluent readers to enjoy. Dr. Seuss’s ABC belongs to the Blue Back Book range