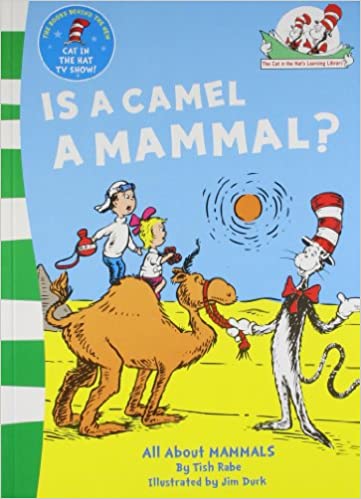 Is a Camel a Mammal?: Book 1 (The Cat in the Hatâ's Learning Library)

5
0%
0
4
0%
0
3
0%
0
2
0%
0
1
0%
0
â€œFrom fruit eating bats to smart chimpanzees, from moles in their holes to seals in the seasâ€, Dr. Seussâ€™ famous Cat in the Hat takes young readers on a fun-filled tour of the world of mammals. This title forms part of a series of books that takes a look at natural history through a fun combination of Seussian rhymes and zany illustrations. Aimed at beginning readers â€“ from four to seven years old â€“ the books are designed to bridge the gap between concept books written for preschoolers and more formal non fiction titles that require fluent reading skills. By presenting the facts in a lively and rhythmic manner, they provide the critical foundation upon which complex facts and ideas can eventually be built. A Childrenâ€™s Bookshelf Selection: Each month our editorâ€™s pick the best books for children and young adults by age to be a part of the childrenâ€™s bookshelf. These are editorial recommendations made by our team of experts. Our monthly reading list includes a mix of bestsellers and top new releases and evergreen books that will help enhance a childâ€™s reading life.