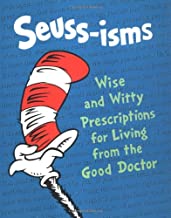 Seuss-isms: Wise and Witty Prescriptions for Living from the Good Doctor

5
0%
0
4
0%
0
3
0%
0
2
0%
0
1
0%
0
The simple but sage words of Dr. Seuss have helped many a child (and grownup) along the complicated road of life. For those who need reminders, here is a collection of some of the good doctor's wisest and wittiest sayings, on subjects as varied as "Equality and Justice" and "Facing Up to Adversity" to "The Art of Eating" and "The First Nerd"! A perfect gift for all occasions, ideal for sharing among generations--now with a "gift tag" on the jacket flap for consumers to personalize!