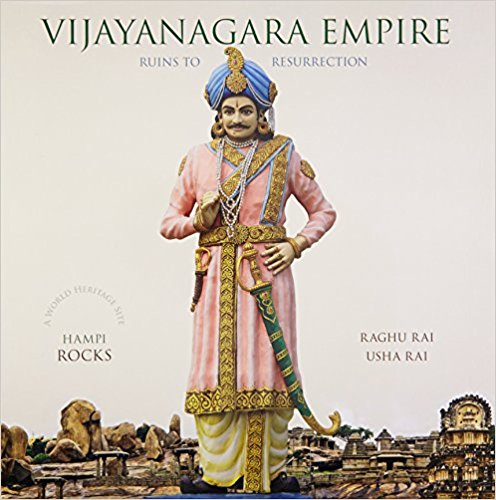 Vijayanagara, once one of the mightiest Hindu empires, has now been reduced to a mere village. Through extensive research and restoration efforts, dedicated conservationists and the ASI have made every possible attempt to restore the lost brilliance of the Vijayanagara Empire. The splendid rocks and large boulders, together with the awe-inspiring royal architecture, confer on Hampi the rare accolade of being declared a UNESCO World Heritage Site for its natural beauty as well. Indeed, with the turbulent Tungabhadra river flowing on one side and rocks and boulders poised in an amazing balancing act, Hampi presents a sight to behold. In Vijayanagara Empire acclaimed photographer Raghu Rai, through his passionate response to the site, takes the reader on a visual experience akin to being transported into the world the way it must have existed centuries ago. His photographs have an archival and ancient feel to them, and yet succinctly capture not only the depths and details of the ruins but also fleeting experiences.

Raghu Rai has been a Magnum photographer since 1977, when he was nominated to the worldâ€™s most prestigious photographersâ€™ cooperative by the legendary photographer Henri Cartier- Bresson. His work has appeared in international publications such as Time, The New York Times, Sunday Times, National Geographic, GEO, The New Yorker and others. For the last thirty years, he has been exhibiting in major cities throughout the world and has won numerous awards. Twenty-five of his photographs are in the permanent collection of the BibliothÃ¨que Nationale, Paris, while he was the first ever photographer to be honoured with the Padma Shri, one of Indiaâ€™s highest civilian awards. He has also appeared on the jury for the World Press Photo Contest three times. Rai has published more than thirty books of his photographs, including this book.