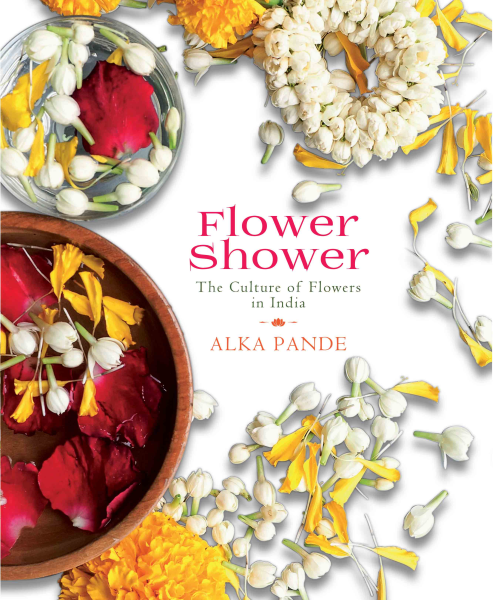 Flower Shower: The Culture of Flowers in India

Flowers occupy a special role in Indian culture, history, myth and tradition. From  the  most  elevated  space  of  the  sacred  to  adornment in  everyday  life, there  is  a  flower  for  every  season,  every  reason and  a  special  one  for  the  numerous  gods  and  goddesses  of  Indian  religion.

Flowers—as offerings during ritual worship to intricate carvings on temple walls, embedded in modern paintings by contemporary artists to colourful carpets for welcoming gods and guests, from fragrant garlands that adorn Indian brides and grooms to aromatic essential oils and perfumes, used as a play of seduction in the Kamasutra—they refresh our spirits and elevate our souls.

Flower Shower: The Culture of Flowers in India explores this integral role that flowers play in our world. Discussing a range of topics from botany to aesthetics and history to poetry, the author takes  you through an immersive  journey, laden  with  the  beauty and  perfumes  of  the  exotic, nutritional and decorative  role of flowers within Indian tradition and  aesthetics…

Dr Alka Pande, Curator and Art Consultant and Artistic Director, Photosphere, is currently the Consultant Arts Advisor and Curator at the Visual Arts Gallery, India Habitat Centre, New Delhi. She completed her post-doctoral studies from Goldsmiths College, University of the Arts, London, in Critical Art Theory, under the aegis of the Charles Wallace India Trust. Her PhD was in the History of Art, on the concept of Ardhanarisvara in Indian Art with special emphasis on sculpture. She has been passionately involved with the world of art for nearly three-and-a-half decades. Dr Pande is responsible for curating several significant and perceptive exhibitions in India and abroad, notably a singular exhibition at the PinacothÃ¨que de Paris titled, â€˜The Kama-Sutra: Spirituality and Eroticism in Indian Artâ€™. In 2006, she was awarded the Chevalier danslâ€™Ordre des Arts et des Lettres or Knight of the Order of Arts and Lettersâ€”an award bequeathed by the French Government. In 2009, she received the Australian Asia Council Special Award. She then went on to receive the Amrita Shergill Samman from the Chandigarh Lalit Kala Akademi in 2014, for her contribution to the arts.
No Review Found
More from Author