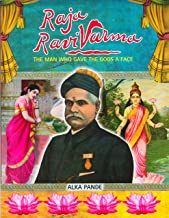 5
0%
0
4
0%
0
3
0%
0
2
0%
0
1
0%
0
Discover the lives of groundbreaking Indian artist from their childhoods, full of dreams realized through passion perseverance and personality. Inspired by the life of Raja Ravi Verma, in 1913 in India to a princely family, this book tells the story of his journey and experience as an artist. His painting, steeped in Indian culture and iconography gave the gods a face.

Dr Alka Pande, Curator and Art Consultant and Artistic Director, Photosphere, is currently the Consultant Arts Advisor and Curator at the Visual Arts Gallery, India Habitat Centre, New Delhi. She completed her post-doctoral studies from Goldsmiths College, University of the Arts, London, in Critical Art Theory, under the aegis of the Charles Wallace India Trust. Her PhD was in the History of Art, on the concept of Ardhanarisvara in Indian Art with special emphasis on sculpture. She has been passionately involved with the world of art for nearly three-and-a-half decades. Dr Pande is responsible for curating several significant and perceptive exhibitions in India and abroad, notably a singular exhibition at the PinacothÃ¨que de Paris titled, â€˜The Kama-Sutra: Spirituality and Eroticism in Indian Artâ€™. In 2006, she was awarded the Chevalier danslâ€™Ordre des Arts et des Lettres or Knight of the Order of Arts and Lettersâ€”an award bequeathed by the French Government. In 2009, she received the Australian Asia Council Special Award. She then went on to receive the Amrita Shergill Samman from the Chandigarh Lalit Kala Akademi in 2014, for her contribution to the arts.
No Review Found
More from Author