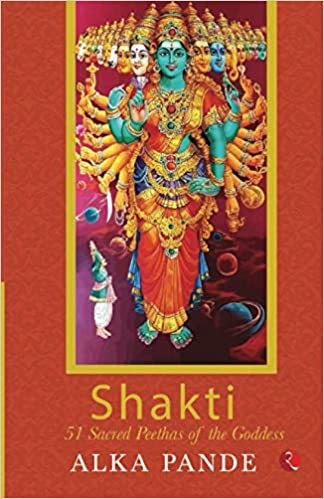 Shakti: 51 Sacred Peethas of the Goddess

This book is devoted to the understanding of the omnipresent and all-powerful shakti and her sacred abodes known as peethas. The story of Devi Sati and Lord Shiva ended tragically with the death of Sati. An angry and inconsolable Shiva took Sati’s lifeless body and started the ‘Rudra Tandava’ or the dance of destruction. To save the world, Lord Vishnu used his ‘Sudarshan chakra’ to cut the body of Sati into 51 pieces and each part fell at different places on Earth and each become a revered shakti Peetha. Renowned writer and historian Dr Alka pande narrates that while the shakti Peetha represent a single philosophical fold, they are a testament to the diverse legends of shakti. Different peethas which became holy at the touch of Sati’s body have survived hundreds of centuries and have kept alive their local folklore of shakti. Together they evoke the mother goddess as both the nourishing and the destructive force behind the existence of the cosmos. The 51 peethas featured in the book can never be an absolute representation of the peethas of the goddess, since the Devi is anywhere and everywhere.

Dr Alka Pande, Curator and Art Consultant and Artistic Director, Photosphere, is currently the Consultant Arts Advisor and Curator at the Visual Arts Gallery, India Habitat Centre, New Delhi. She completed her post-doctoral studies from Goldsmiths College, University of the Arts, London, in Critical Art Theory, under the aegis of the Charles Wallace India Trust. Her PhD was in the History of Art, on the concept of Ardhanarisvara in Indian Art with special emphasis on sculpture. She has been passionately involved with the world of art for nearly three-and-a-half decades. Dr Pande is responsible for curating several significant and perceptive exhibitions in India and abroad, notably a singular exhibition at the Pinacothèque de Paris titled, ‘The Kama-Sutra: Spirituality and Eroticism in Indian Art’. In 2006, she was awarded the Chevalier dansl’Ordre des Arts et des Lettres or Knight of the Order of Arts and Letters—an award bequeathed by the French Government. In 2009, she received the Australian Asia Council Special Award. She then went on to receive the Amrita Shergill Samman from the Chandigarh Lalit Kala Akademi in 2014, for her contribution to the arts.
No Review Found
More from Author