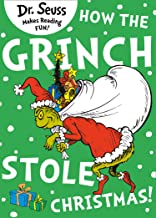 How the Grinch Stole Christmas!

5
0%
0
4
0%
0
3
0%
0
2
0%
0
1
0%
0
This classic Dr. Seuss tale tells the story of the disgruntled Grinch and his fiendish attempts to steal Christmas from the citizens of Who-ville. With wacky rhymes and zany illustrations from the master himself, it has been a favourite of young readers for over 60 years. The Grinch hated Christmas! The whole Christmas season! Now, please don’t ask why. No one quite knows the reason… With a heart two sizes too small, the Grinch is the meanest creature you’ll ever meet. He hates Christmas and the whole festive season. But when he hatches a dastardly plot to steal Christmas, he’s in for a big surprise! With hilarious rhymes and beautiful illustrations, this classic seasonal story has become a favourite for good reason and teaches readers the true meaning of Christmas. As part of a major rebrand programme, HarperCollins is relaunching 10 more hilarious Dr. Seuss books, including such all-time favourites as How the Grinch Stole Christmas!, Mr. Brown Can Moo! Can You? and Dr. Seuss’ Sleep Book. In response to consumer demand, the bright new cover designs incorporate much needed guidance on reading levels, with standard paperbacks divided into three reading strands – Blue Back Books for parents to share with young children, Green Back Books for budding readers to tackle on their own, and Yellow Back Books for older, more fluent readers to enjoy.