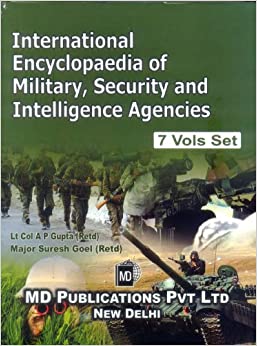 This Encyclopaedia describes important military, security and intelligence agencies of the world. An intelligence agency lives in a world of shadows. It cannot function if it is not able to keep its sources, its methods and many of its operations secret. The 120 chapters include; arms, ammunition, intelligence agencies, operations and responsibilities in their respective countries. The principal theme of this new encyclopaedia is the dilemma of maintaining a secret organization in an open society. An extensive bibliography and comprehensive index complete this user-friendly, informative title. This book is beneficial for academician, public libraries, intelligence people, defence persons and military experts.

A P Gupta is retired Lt. Col., born at Karnal on 15 Oct. 1939. He has joined National Defance Academy Kharakavasla commissioned in the Regiment of Artillery in the year 1959. He actively took part in the Indo-Pak war, 1971 from the Khemkaran Sector. After retirement from the military in the year 1990, he was the associated with several Reputable Security Agencies of NCR Delhi . Apart this he is also sharing this experiences through writing books on military, security and intelligence agencies.
No Review Found
More from Author