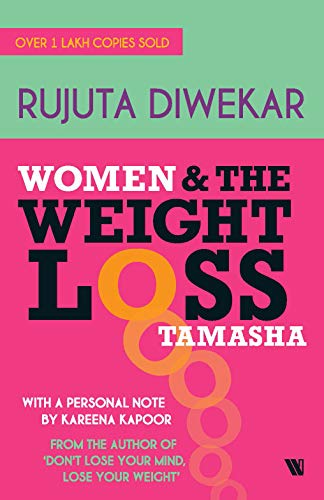 Published in the year 2011, Women And The Weight Loss Tamasha is a book that serves as a guide for women who want to lose weight and look fabulous.

Summary Of The Book

Women And The Weight Loss Tamasha is the sequel to the author’s previous weight loss book entitled Don’t Lose Your Mind, Lose Your Weight, and is directed towards women only. Through the course of this book, Diwekar begins to throw light on the different stages in the life of a woman, and how they impact her life. In her previous book, Diwekar explained that eating the right kind of food is essential for controlling excess weight gain. However, in this book, she tells the readers that there are four principles for women to remain fit and healthy.

These principles include Sleep, Relationships, Nutrition, and Exercise. In this book, Diwekar writes about the life of Indian women, from puberty, right till the time she gets married, along with the stress of handling everything at home. Through the course of this book, she also provides answers to a number of questions, as to whether hormonal problems result in weight issues, or whether stressful schedules cause lifestyle disorders. The author answers the above-mentioned questions, and much more, by providing concrete scientific proof to back her statements.

All in all, this book, Women And The Weight Loss Tamasha provides Indian women with all the info they need to begin their weight loss plan, and achieve the success they always craved for, making it a must-have. The foreword of the book is written by the famous Bollywood actress Kareena Kapoo.

The author of Don\'t Lose Your Mind, Lose Your Weight, Rujuta Diwekar, won the Nutrition Award in the year 2010. She won this sought-after award from the Asian Institute of Gastroenterology. She received instant success with her first book, selling more than two lack books in four different languages. She is also the only nutritionist who received accreditation from the Sports Dieticians, which is based in Australia.
No Review Found
More from Author